Learning to Bee Natural – guided by the world around and within

Our yard is natural and also very small so when branches come down we tend to pile them up.  This takes up valuable room and I had been watching a particular pile for almost a year.  Upon re-reading parts of Gaia’s Garden by Tony Hemenway I came again across the Hugelkultur section and finally made the connection – a way to build a garden and get rid of the sticks!

Hugelkultur are a method of piling wood up and putting soil on top to create a garden bed.  They are very versatile; I had small sticks so that is what we used but some use huge logs.  The idea is that as the wood breaks down it holds water and provides nutrients for your plants.  My neighbor has a backyard she doesn’t use with sandy fill soil and a couple of orange trees.  It gets nice sun, is accessible to us, and she had been asking us to put a garden there for years so this August we began. 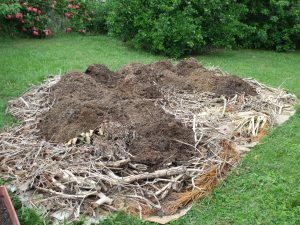 I got large old boxes from the cardboard recycling bin and laid them out on the grass, then piled all the sticks up on top and stamped them down to about a foot high.  I loaded three 40 quart plastic bins into the trunk of my Honda Civic and headed over to the nearest stable to get some horse manure.  It was really raw manure so I figured this garden wouldn’t produce much the first year.  About 5 manure runs later I was blessed with a friend and his pickup who came to help finish the job with much less driving.  We then got a load of rough mulch from the county and added that on top.

A week or so later I planted Calabasa squash, each seedling in a hole of good soil.  I knew they would go all  over but I didn’t think much would grow this year anyway so might as well try the squash.  As time went by hundreds of mushrooms came up from the pile and I could pick up a handful and see the mycelium running through the soil.  I started thinking this garden might be better than I had hoped now that mushrooms were helping us out.

My mom and neighbor got involved and all kinds of plants went in, from tomatoes to kale, even a spaghetti squash from a random seed.  The squash overran everything to some extent but stuff grew anyway.  I have been amazed by how much this garden had grown in its first season.  Here is the garden from January, about five months after we loaded on the manure. 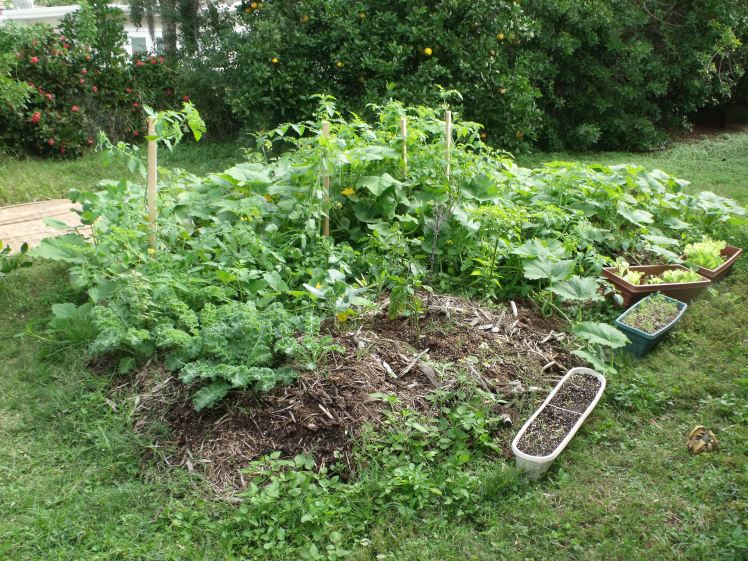 The tomatoes look like they will go until summer, kale is great, we got a spaghetti squash last month and today I harvested a broccoli and a huge Calabasa.  I’m hopeful that the beets and onions will take off once the squash is gone.  I think it worked so well because the sticks were aged and had fungus already started on them so the manure was quickly broken down.

One thought on “Hugelkultur Garden”